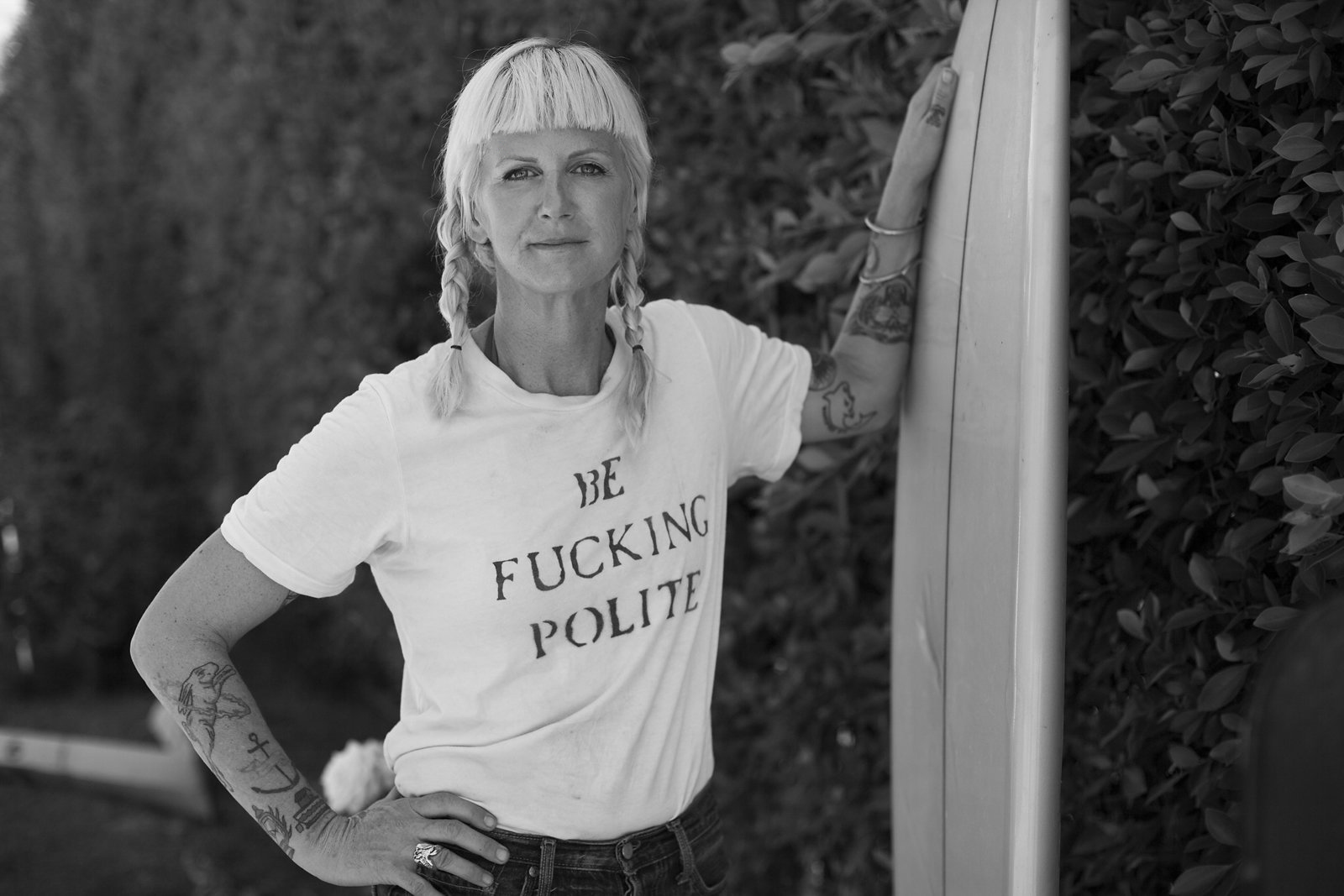 A professional photographer that craves adventure-based subjects and locations, who can also quite happily go a month without wearing shoes and read in a hammock. Heidi Zumbrun’s work focuses on fashion, surf, skate and motors — creatively capturing Los Angeles’ beach and street culture. A graduate of the University of California: Santa Barbara, and a Masters degree in fine art from the San Francisco Art Institute, Zumbrun’s photographs are part of permanent collections across the USA and has been the recipient of numerous awards and accolades. 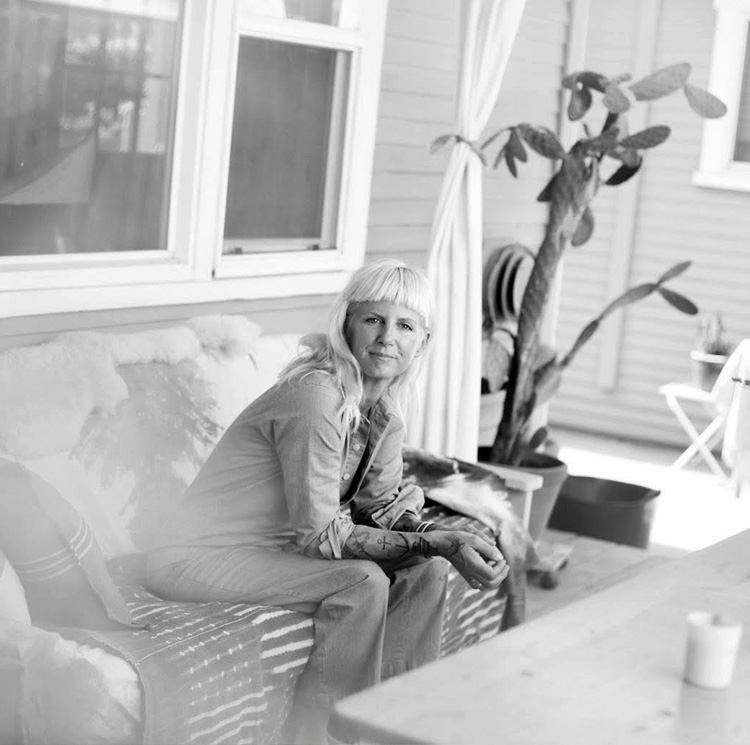 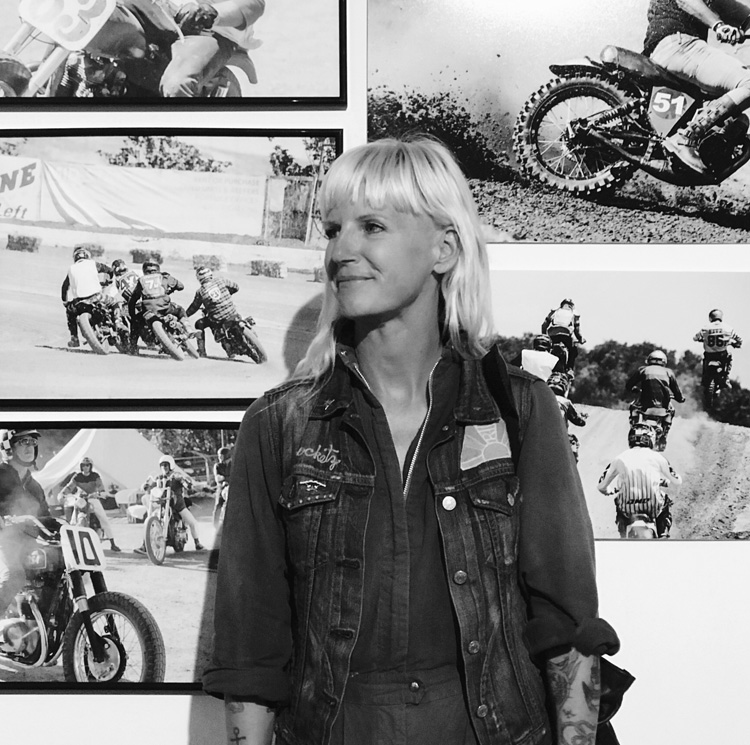 We live in an age where everyone is a photographer, but you of course take photos to earn a living. Do professional photographers need to value relationships with clients more now than ever?
Oh absolutely, it’s imperative that you have a personal connection with your clients. I’ve been fortunate in that my clients have become friends, but there is still a certain amount of self-promotion that you need to do to be relevant. Instagram is crucial — that’s how they find you. Which can be a good and a bad thing.

All successful creatives have a breakthrough moment, tell us about yours?
For me it wasn’t about the camera straight away. I was studying fine art and took a photography class but it didn’t resonate with me immediately. My teacher suggested I go to New York for intern work and he suggested a number of places where he had contacts, who I then wrote to. When I arrived none of them had ever heard of him [laughs] but were accommodating because I had made the effort to write letters. I learnt a lot about the business while in NYC, including printing and editing which stood me in good stead for my pending career. It wasn’t until an exhibition at my graduate school in San Francisco that my big break came. An art buyer happened to walk in and promptly bought all three of my works that were displayed — which were then placed in a travelling collection that ended up at the San Francisco Museum of Modern Art (SF MoMa). Suddenly I was in the fine art world!

What are the origins of your passion for motorcycling?
It probably goes back to school when I stalked a girl that rode a bike [laughs]. While studying at the San Francisco Art Institute I lived next door to the famous dive bar Zeitgeist in Mission where there were always loads of bikes lined up outside. I knew I needed to experience the thrill of the open road so I sold my car and bought a 1975 Kawasaki KZ440. I learnt to ride it in the parking lot of a zoo! My love of riding motorcycles naturally progressed to including it in my own profession. It came at time in my career when I needed to start shooting things that made me excited.

We’re assuming your nickname — Sprocketz — has a connection with motorcycling?
It must have started about 20 years ago when I began riding, I got a tattoo of a sprocket. I only recently changed my Instagram handle to my real name. I added the ‘z’ for the first letter of my last name. 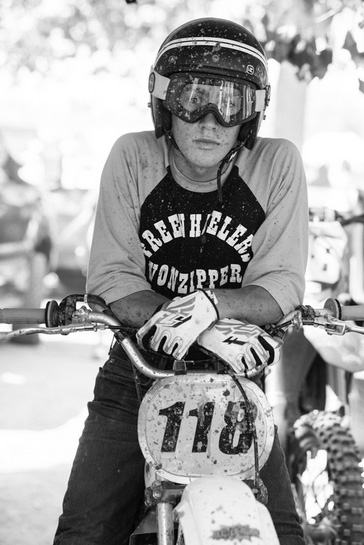 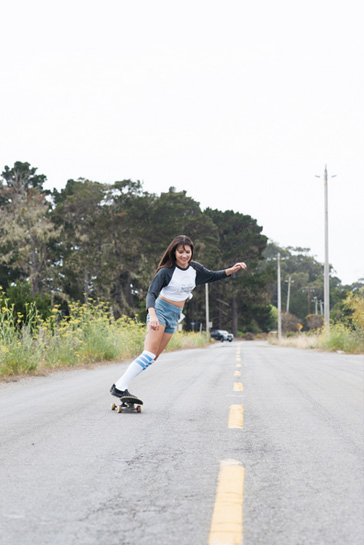 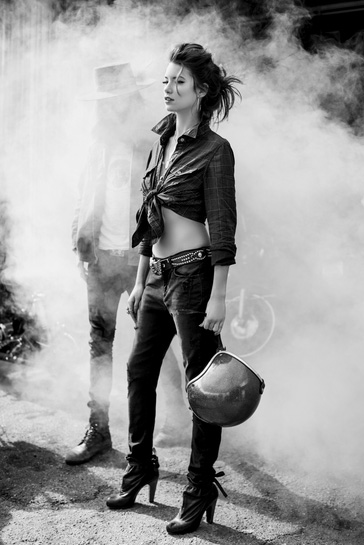 Three of your four primary areas of focus — surf, skate and moto — is currently experiencing its heyday. Is there a saturation point, how long can it last?
Who knows, so many things in life are cyclical, but right now we’ve literally just got to ride the proverbial wave — and it’s a big one. I never thought I’d see an event in my lifetime like Babes Ride Out, with nearly 3 000 women riding motorcycles and camping for four days in the Joshua Tree desert region of California! [https://babesrideout.com]

In a cluttered world of mass information, hurtling at us from every direction, how do you choose what media to consume?
Oh man, I can go down an Instagram rabbit hole like the rest of us! But I feel like I need to scan through loads of material, seeking visual inspiration for my own work and future events to attend. I am very conscious though of detaching from the screen. I force myself to engage with a tangible product like a book or magazine. I’ll also leave my phone at home when going out to a movie.

Have you ever had a harrowing moment during a shoot?
My first ever solo exhibit in New York was due to open on September 11, 2001 in Manhattan. We were hanging the final pieces till late on September 10 at the Ariel Meyerowitz Gallery in SoHo and were due to return the next morning for final preparations. Usually I would stay nearby overnight, but renowned photographer Joel Meyerowitz had given me the use of his apartment on the Upper East Side some distance away. We obviously woke up to the news of the devastating events that were unfolding. We only opened the exhibit six months later.

[Editor’s note: SoHo and the original World Trade Centre (Twin Towers) are in close proximity to each other in Lower Manhattan.]

What events or destinations are on your wish list to participate in or shoot?
The Frozen Few, who get up to winter shenanigans in the frozen tundra of Wisconsin. Also the series of Hot Rod events at Pendine Sands in South Wales (UK), featuring straightline beach speed races and grass/flat track classes. 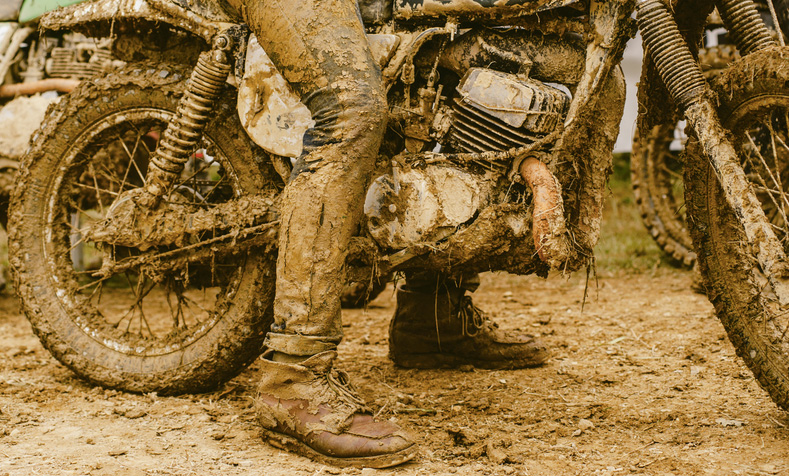 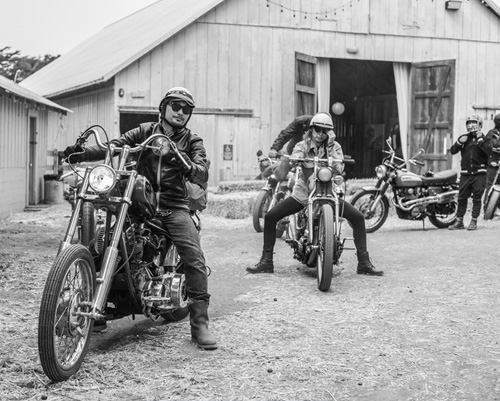 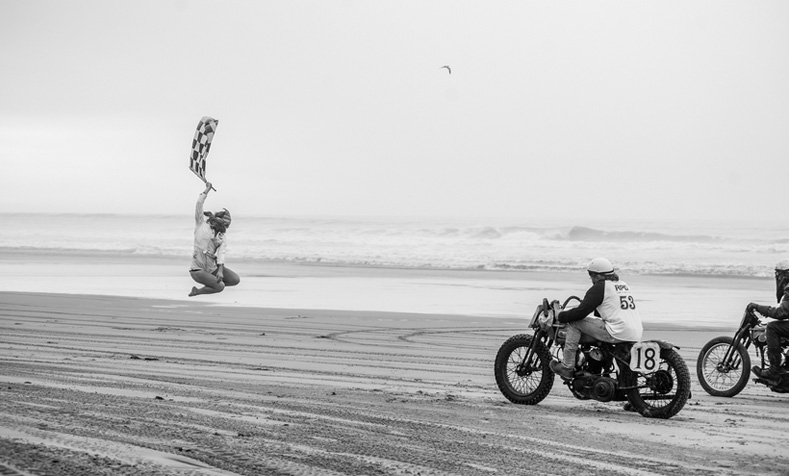 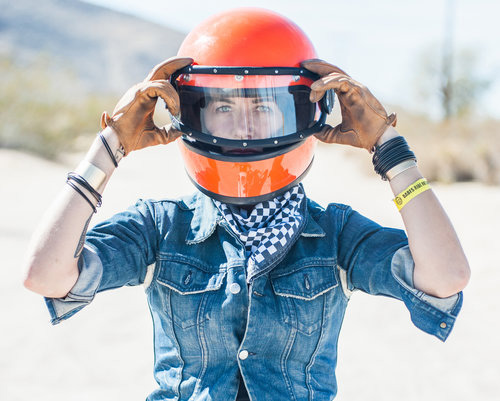 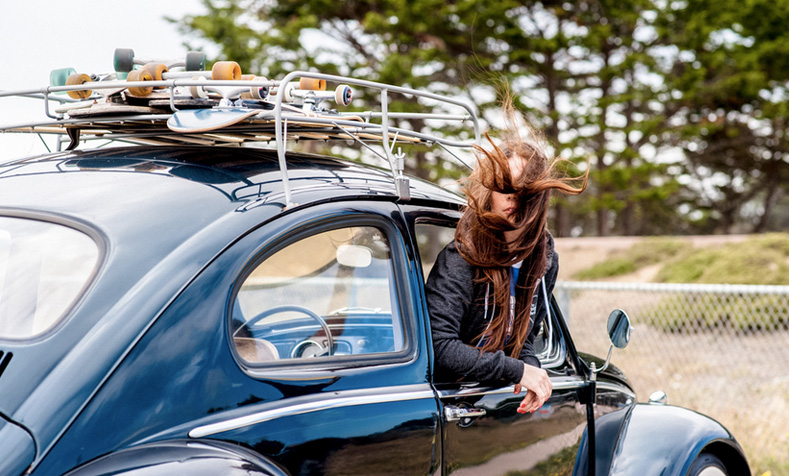 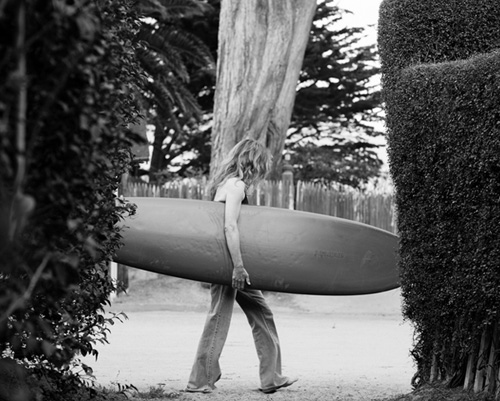 What’s your most treasured possession? The Nikon FE2 camera that my dad gave to me on my 16th birthday. I thought I was getting a necklace!
What’s your favourite journey? Anywhere where I don’t have to wear shoes for a month, involving sand, surf and a hammock. Mexico is usually the best bet.
Who was your hero growing up? Amelia Earhart. My grandmother flew in one of the first biplanes with her boyfriend/pilot Slonnie Sloniger, so Earhart’s legacy resonates with me.
What’s the greatest ever TV show? Greatest ever is a big call, but at the moment The Handmaid’s Tale is most relevant and I’ve been watching it obsessively.
What will you never eat or drink? I think if you’re starving you’ll eat anything, but I’d definitely steer clear of insects. I don’t drink alcohol at all. Motorcycling and alcohol do not mix — so I cut drinking out of my life completely.
What do you never leave home without? Sunglasses!
Who or what do you learn from? The subjects I photograph. Almost every time.
What activity have you got better at with age? Surfing, well at least I hope so. Also, sitting still — it’s been hard, but I’ve found it important to sometimes just take time out to do nothing and reflect on life’s happenings.
What is your guilty pleasure? Pizza from Masa near my home in Echo Park (LA).
Your three rules for a happy life? Making time for myself to reboot; spending moments with loved ones and travel — lots of it.
What was the first record you ever bought? The Rolling Stones ‘Sticky Fingers’.
What infuriates you? Impatience. In myself and others. Oh, and road rage!
What’s your final meal? A visit to Sushi Gen restaurant in Downtown LA with Ben & Jerry’s Cherry Garcia ice cream for dessert.
You leave tonight: What city, which band? Rabat, the capital of Morocco to see Led Zeppelin is reality. In a dream: My favourite band, Joy Division, on the moon!
Would you like to be:
Sitting on plane next to? Slonnie Sloniger of course!
Stuck in a lift with? My first boyfriend … I want some answers! Or Steve McQueen 😉
Having dinner with? Louise Bourgeois, a French-American artist. I never got a chance to pick her brain before she passed away.